It’s that time of year again! Lobster season is upon us! Between the dates of August 6th and March 31st you can harvest lobster!

Here are some “FUN FACTS” about those deliciously spiny lobsters, complements of the National Park Service.

– Spiny lobsters reproduce in spring and summer. Females carry the bright orange eggs on the underside of the tail until the eggs are ready to hatch. 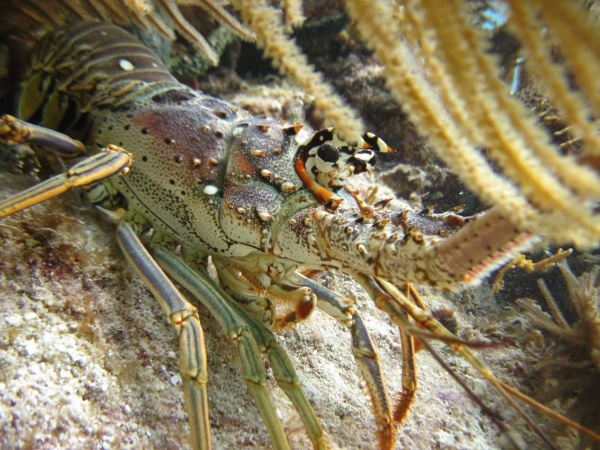 – Once hatched, the larvae will travel long distances as plankton in currents before settling into shallow water nursery habitats.

– Puerulus is the term used to describe the free-swimming phase that moves out of the plankton and into benthic habitats.

– As a spiny lobster grows, it molts, or loses its hard protective exoskeleton (carapace). After molting, the lobster is soft-bodied and very vulnerable to predators for about two days until its new, larger exoskeleton forms over its growing body.

– Spiny lobsters are nocturnal, and emerge from their hiding spots during the night to forage on their favorite foods, including crabs, clams and other invertebrates.

– Spiny lobsters have two large antennae, with are used for fighting and defense, and two smaller antennules, which are sensory organs that can detect chemicals and movement in the water.

Now, after reading how very interesting these underwater crustaceans can be do you still want to harvest them? If yes, then here are some just as interesting and equally important rules and regulations to follow:

Bag Limit: 6 per person per day

Minimum Size Limit: Carapace larger than 3″, measured in the water
Possession and use of a measuring device is
required at all times

Lobster must be landed in whole condition. Separation the thail from the body is prohibited in state waters.

The harvest or possession of egg bearing spiny lobster is prohibited.

More information on the “Rules and Regulations”

Book Now
Cancellation Policy
***We understand your travel plans may change. With that in mind, Horizon Divers has a very simple cancellation policy: As long as you cancel outside of 24 hours there is NO charge. However, if you cancel within 24 hours or NO-SHOW the day of your class/course or trip we will be charging the full amount of the dives or 50% of the course/class. Thank you!***
Boat Release & Waiver

Click for our Boat Release that is now available online. You will still need to check-in at our shop of the 1st day of your dive trip.